I gotta get better at this blogging more thing.  Or maybe I don't because let's face it, it's a little narcissistic.  But if I do need to get better at it, I'm not going to say it's because I don't have time because really, none of us have "extra" time these days, right?  HOWEVER, I'm a firm believer that all of us have time for the things we see as a priority and are super passionate about.  It's like my Dad always says, "excuses are like a**holes, everybody's got one."  So true!  If you want to get something done, you'll figure out how.  Did I also mention that as the older I get, I don't know when to shut my mouth?  Ahh, shit.

K, let's start over.  So, yeah, after what I would call a shitnado of a first half of the year in 2018, I'm super jazzed to report that this year is off to a much better start.  Once I started training again in June, it took me a looooooong time to feel good again, but with a little bit of irrational crying and yelling patience, I stuck with it and knew my body would rebound sooner or later.  After all, your body doesn't forget all the work you've done in the past, and talent doesn't just disappear, so a little faith can go a long way... 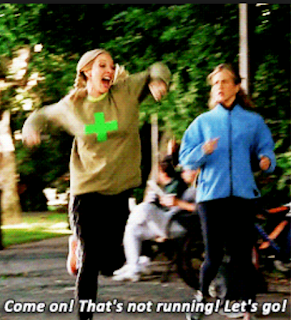 After the 5K and letting my foot simma down (thanks to Elite Performance Chiropractic for that!), it was time to get into marathon mode.  Dude, the miles were NOT feeling easy though.  I had to dig deep into my bucket of mental power nuggets to keep myself from saying F it.  I'd be running at what I thought was cruise control for long runs, which is typically ~7:00 pace, and when I'd get done, it would say ~7:45.  Huh??  Here's the thing.  I know I'm no spring chicken anymore, and while I will NEVER use age as an excuse for why you can/cannot do things, our bodies DO change.  So, recognizing this and making the proper adaptations for it went a long way.  It now takes me much longer  to "hit my stride" from base phase to peak, to warm up into workouts, and to recover in-between workouts.  All easy adjustments though...

About halfway through this marathon cycle, my hubby/coach Mike decided to try something new.  Enter:  Hanson.  He took what I was used to doing in training and blended it with the Elite & Advanced Hanson's marathon method.  Basically, I wouldn't have down mileage weeks anymore, but I'd alternate a week with three to four workouts, followed by a week with four recovery days in a row.  We knew this wouldn't be enough time for a full cycle of it before Myrtle Beach, but I gotta say, I LOVED IT and am excited to give it a full go this fall.  I hit an 80-mile week for the first time ever, and my peak workout was a 15-mile run with eight in the middle @6:02 avg.  It was starting to click.

Race week, I was feeling relaxed.  Well, I mean, I hit the refresh button on weather.com about 7,249 times a day, but other than that, super relaxed.  We got to Myrtle on Thursday, hit up the hotel's lazy river, ate a buttload of baked ziti, got through the expo, and were ready to roll.  The start temp on race morning was a f&#*ing 61 degrees and 90-something% humidity, so that, you know, sucked monkey butt, but I was still pretty sane.  My goal for this race was to compete and aim for a 2:50ish, but most importantly, to come back and FEEL GOOD.  Seriously, after the great shitnado of 2018, running strong and happy was super important to me. 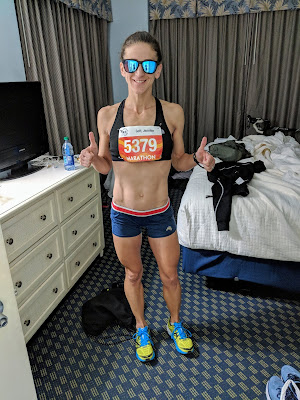 Miles 1 to the 10K:  Ummmm, I have NEVER experienced mile markers so HORRIFICALLY misplaced in a marathon before.  I realized by mile four that this would need to be a "just run how you feel" kinda day because when you hit one split in the 5:50s and the next in the 7:00s when you didn't change your effort at all, you know that shit ain't right.  Anywho, I was running with another female and her male posse for the first five miles or so, and when a lead motorcycle appeared around mile three, I knew this meant that we were the two leaders.  Hey, cool!  At mile five, I was feeling too easy, so I picked up the pace a bit and took over the lead for good.  The 10K passed at a 6:33 avg.  Luckily, the timing mats seemed placed correctly, so this gave me an idea of where the heck I was (I don't, and never will, wear a GPS watch.  I'm all for trusting my body.). 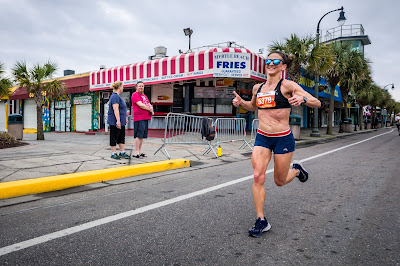 Miles 10K to 13.1:  Um, so I carry my GUs in my boobs.  I have a North Face Stow-n-Go sports bra with a big ol' pocket on the front, and it's FANTASTIC.  Except for when it's not.  At mile seven, one of them suckers flew out the top of my bra.  I didn't freak until another one flew out too.  Gahh!  I decided to go back and pick one of them up but knew I'd now be down a gel (I take four on the course).  This is also where an aid station volunteer yelled "water!" and gave me gatorade instead (Double gahh!  Note...dumping gatorade on your arms is NOT AWESOME.), and I realized I was starting to dehydrate since it was humid and I had already missed another earlier water station.  Then, at mile 10ish, a MASSIVE WALL of runners cut onto the course from the boardwalk about 50 meters right in front me.  WTF??  Apparently the 5K merged at the, uh, wrong time (at least for me and the guy behind me that thought a "f*cking conference" <-- his words, not mine ...was letting out).  So yeah, for about a seven-mile span here, I was a hot mess.

Miles 13.1 to 18.3:  Logan was standing at the halfway mark (1:25:09 ... 6:30 avg) and handed me a very much needed extra gel, yay!  Except I dropped it and heard him cry, "Mommyyyyy!"  So, mommy dilemma... Do I go backwards yet again and get the gel??  Or do I keep going??  Um, I decided to keep going and therefore suck at life.  Luckily, the same guy that thought a  f*cking conference had let out went back for me, grabbed the gel, ensured my child was happy, and saved my a$$.  Faith in humanity = restored.  Around mile 14, a breeze picked up, the humidity started steadily dropping, and I was feeling good.  I crossed the 18.3 mile timing mat at a 6:29 avg.

Miles 18.3 to 26.2:  There was an annoying out-and-back at 18.3, but this enabled me to see the substantial lead I had on the next female.  Also at this point, I started to get some calf and, um, jay-jay (<---being a female sucks sometimes) cramps from the earlier humidity.  I was still feeling really strong though, and since I wasn't going for the OTQ time or anything, I kinda just cruised in from here.  At mile 25, I high-fived Logan again and saw the rest of my family (Coach Hubs, Cooper, Ginny & Charlie... who are Mike's parents that make these weekends possible by traveling and helping with our boys!).  Rounding the corner to the finish was the best finish line ever... a bunch of my Streakers lined up and high-fived me in.  Finish = 2:51:38 (6:32 avg). 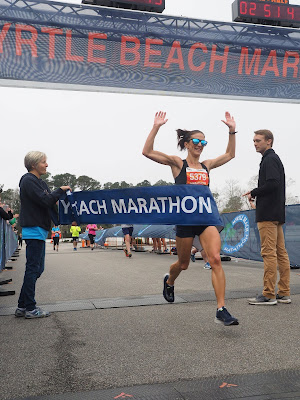 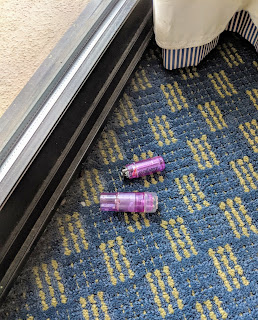 Aaaaand your day is now complete...

Mmk, digression over.  As are our future visits to Myrtle Beach.  So, what's next.  I plan to get a full cycle of this new training style in and attempt the OTQ standard this fall.  I have a lot of time before then, so right now is all about full recovery and hoping that my fat pants don't get too tight.  Seriously though, I purposely gain a few el bees during this time as a means of storing energy for when base phase begins again (<--or at least this is what I tell myself to justify my skittle binges). 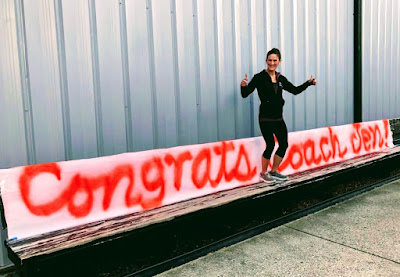 My Streakers are the best! 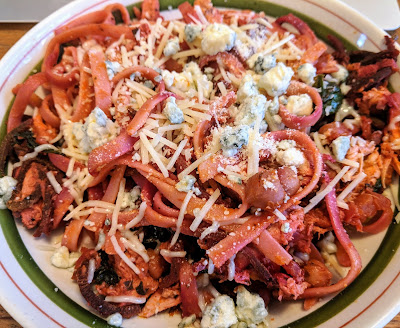 Experimenting with "power" foods.  Even 1% improvements matter at this point!
Pasta with beets, chick peas, and spinach! 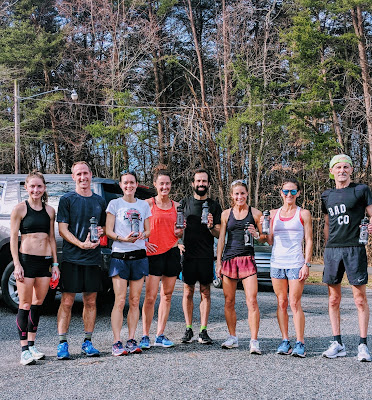 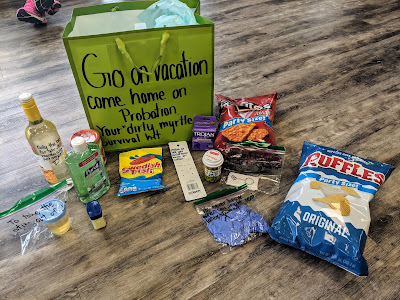 They also surprised me with this post-race Dirty Myrtle gift bag :D 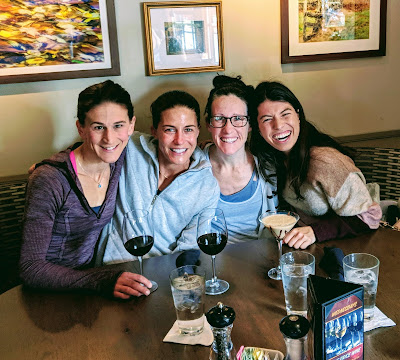 Fast Fab Friends, all of whom have come into my life this past year! 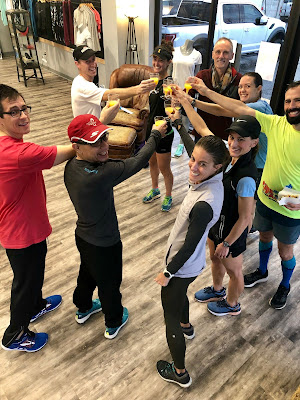 Cheers-ing to Elle after her Houston run!  Fun being on the OTQ journey with her! 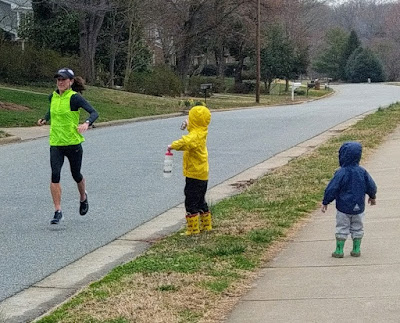 My #1 fans cheering me on during a tempo run! 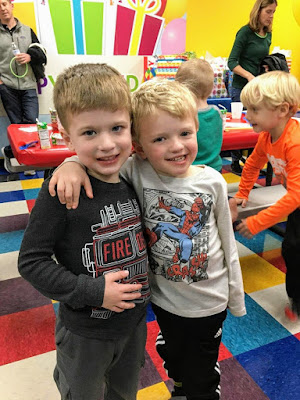 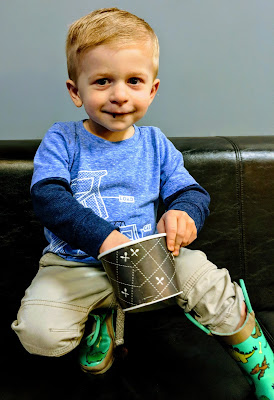 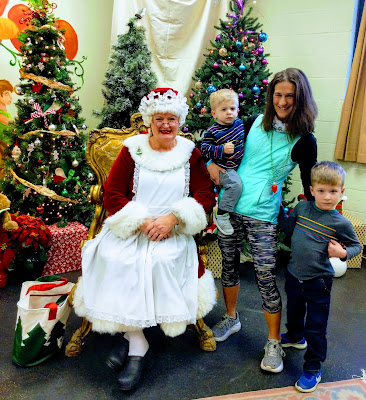 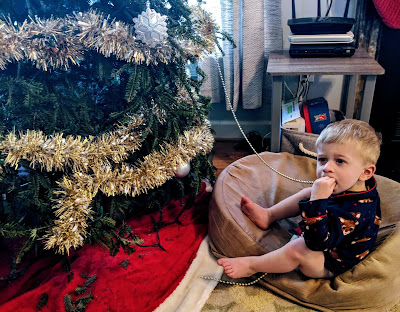 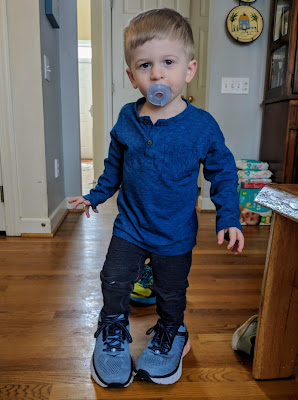 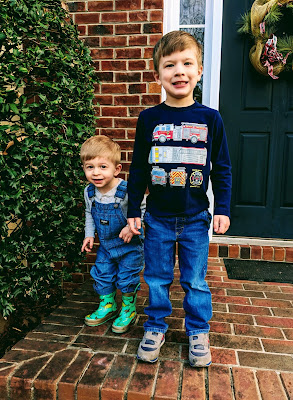 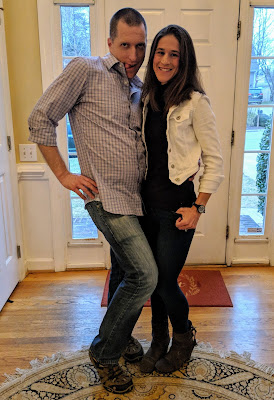 Thanks for the fun, Dirty Myrtle!  Onward!
Posted by RunJen at 9:49 AM No comments: