What do female reindeer do on girl's night out?

BAHAHA.  No, I didn't make that up.  Yes, it was one of the cards for sale in Target's "naughty and nice" section.  No, that was not their raunchiest one.  Yes, I did buy three of them one.

It's kinda sad, but while Christmas shopping, I was tummy-hurts-cracking-up while reading these cards.  Perhaps my head has been stuck up my ass for too long now, but when did Target get so racy?!  Regardless, it helped me realize something:  In 2015, I want to have more fun, stress less, and c-to-the-h-to-the-ill out.  Mind you, I am not one for New Year's resolutions (I mean, why make changes in January?  What's wrong with June?  If you want to get in shape, June is warmer...jus' saying), but I guess this kind of is one?  Lawd help me.

We are 17 days into the New Year, and my early resolution report card gives me a B-.  To earn an A, I should have corrected myself as such in the following situation:

While out on a stroller run with Logan, a nasty sweet old lady honked her horn in Logan's face for what I thought was no reason, until she turned her car around and berated me for running on the wrong side of the road.  Nasty Sweet old lady obviously does not know the rules of running on the road, so instead of flipping her two birds, I should have simply educated her on them.  Or just flipped her one bird  ...a B+ ain't too shabby.

Okay, so where have I actually done well?  Let's start with work.  I made the decision to cut back about 20% of my responsibilities in favor of more time with Logan, Mike, and friends.  I'll still be working full-time but will focus primarily on coaching, which over the past few years has become my true passion.  It took me a long time to follow through on this decision; I was a little afraid of being perceived as a failure for admitting I couldn't handle everything.  However, what's liberating now is giving two shits, wait no, SIX shits, about what others think of me.  Did you know that 91% of peeps pick their nose on a daily basis?  Yep, ain't no one gots room to judge (and apparently 17% admit to doing it in their car.  Eww.  Where do they put their boogers!?  ...aaaand, we're off topic.).

Mm k, so, after the Philly Marathon, I took two weeks off before commencing with the "jackass" phase again.  ...ya know, that phase before base phase in which you run whatever the heyull you want, and hence, act like a total jackass.  Oh, you don't know?  Whatever, jackass.  Anywho, the problem now is, I'm having a slight knee, um, problem, which I'm about 87.2% sure is IT Band Syndrome.  This is undoubtedly a result of ignoring my tight hamstring while training for Philly, as my attention was primarily being given to please-don't-shit-yourself prevention.  Over the past few weeks, I was stubbornly running through the ITBS, but after a 9-mile run this past Tuesday, I knew it was time for some rest.  So, with that said, my name is Jen, and it's been four days since my last run...

Here's the thing though...I'm at peace with it.  Whoa now...this chill Jen bitch is scaring me!  With a little TLC, my knee will get better, and running will, as always, still be there.  If all goes well, you sure betcha I'll line up for another marathon this spring.  If not, no worries, the fall isn't too far away, and it looks like Chicago is my next calling.  I already have new marathon goals, in addition to some over shorter distances, and I'll attack them when healthy.  In the meantime though, on Wednesday, I rode the recliner bike (recliner bike...that's an oxymoron, right?) for 30 minutes on level wimpy seven while gossiping with a friend and checking Facebook.  HARD.  CORE.  ...but it was fun!

As for my tummy issues, still no answer, but here's what I've determined...I'm about 79.4% sure I'm dairy intolerant as a result of pregnancy.  However, the daily pleasure I receive from drinking a 16-ounce filled-to-the-rim-with-milk white chocolate mocha outweighs the severe potential of shitting myself while running.  In fact, if that were to happen, I may even console myself by eating cheese.  On another good note, my strep throat has decided not to make its fourth appearance.  Although she's scary, that chill Jen bitch gets all the credit; it turns out that cutting yourself some slack works wonders for your immune system!

So, there ya have it.  While 2014 was amazing for so many reasons, I am looking forward to 2015, a new perspective, less stress, and more time with my two men, friends, friends' babies, and, well, me. 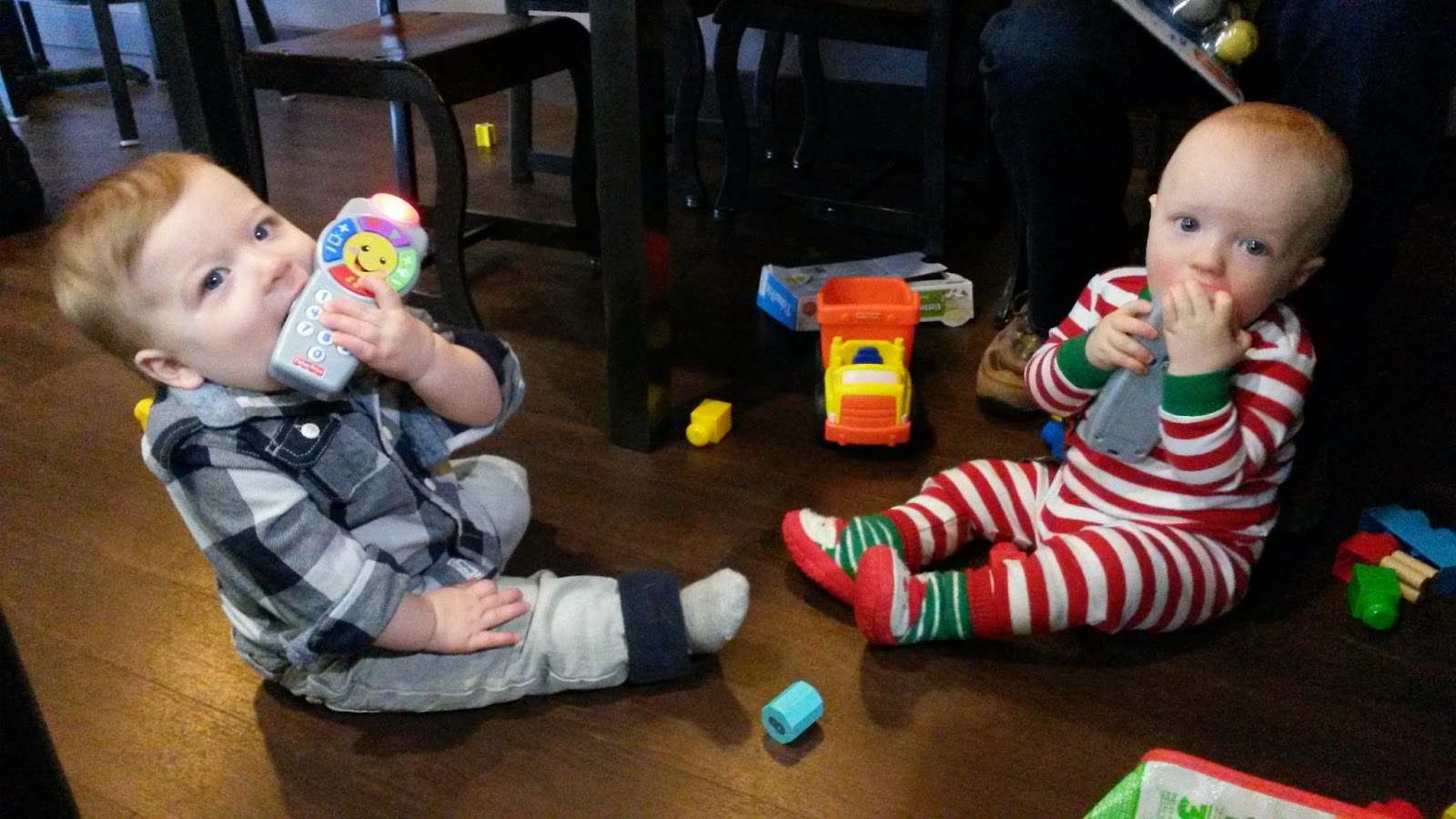 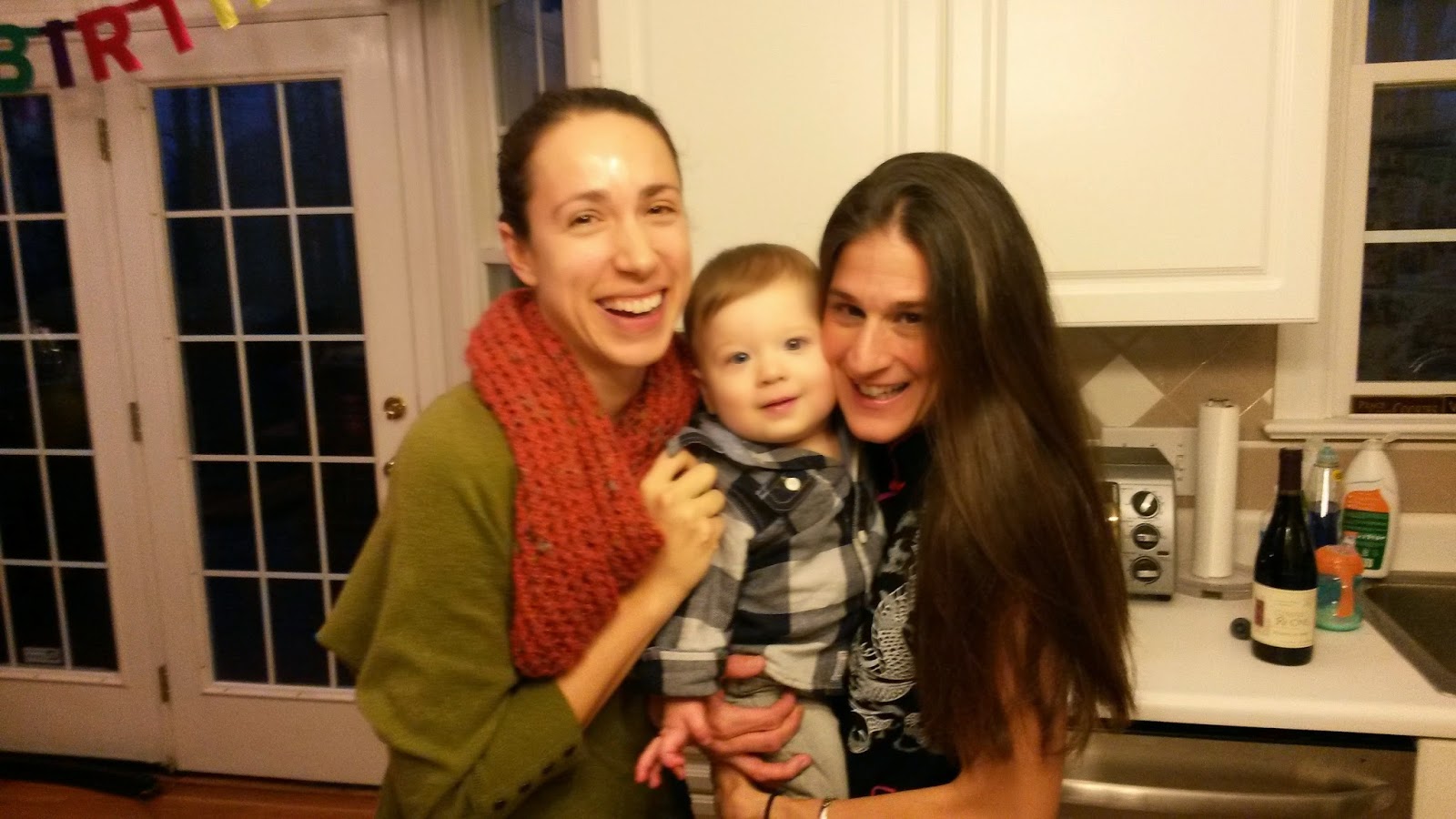 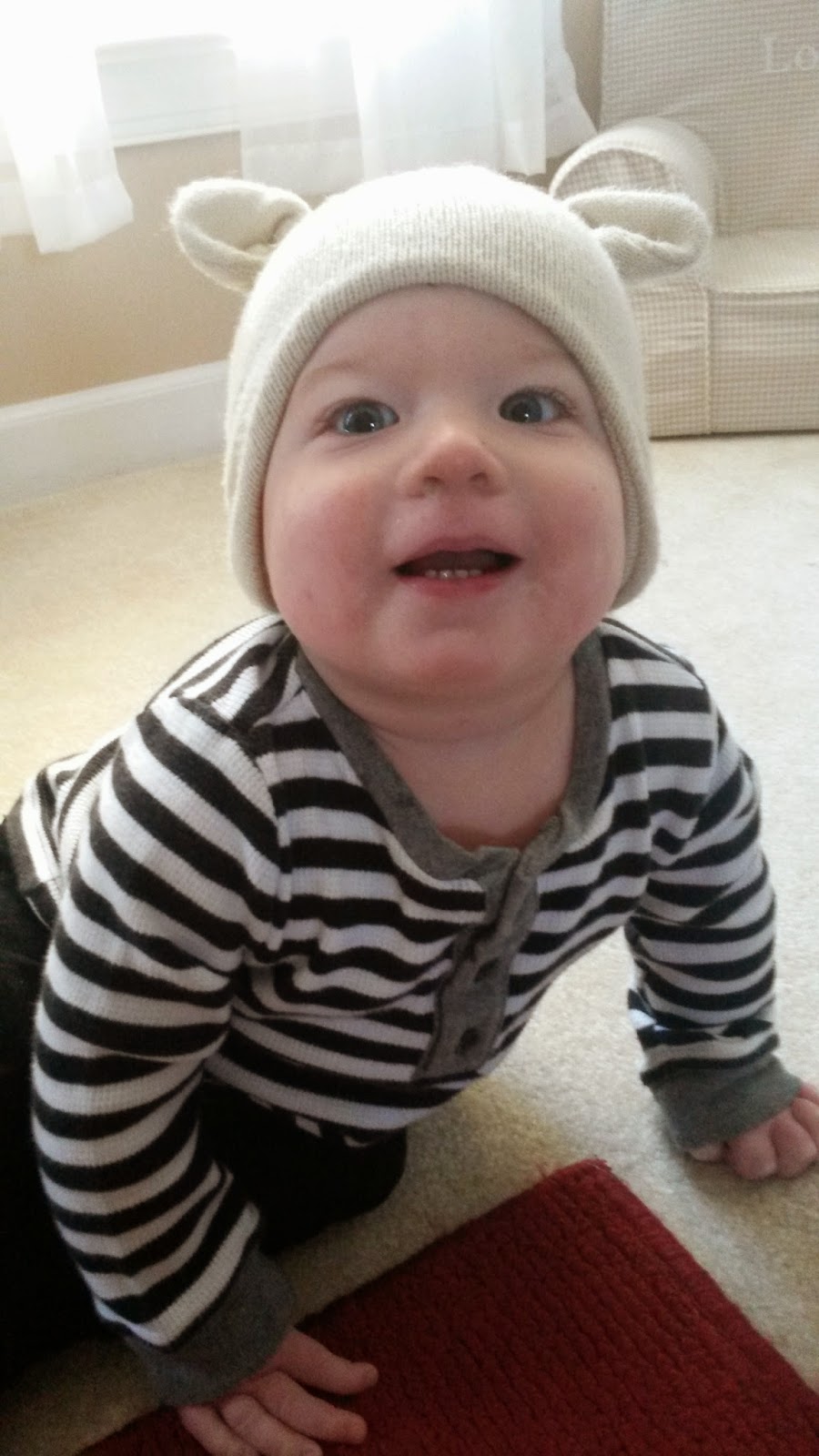 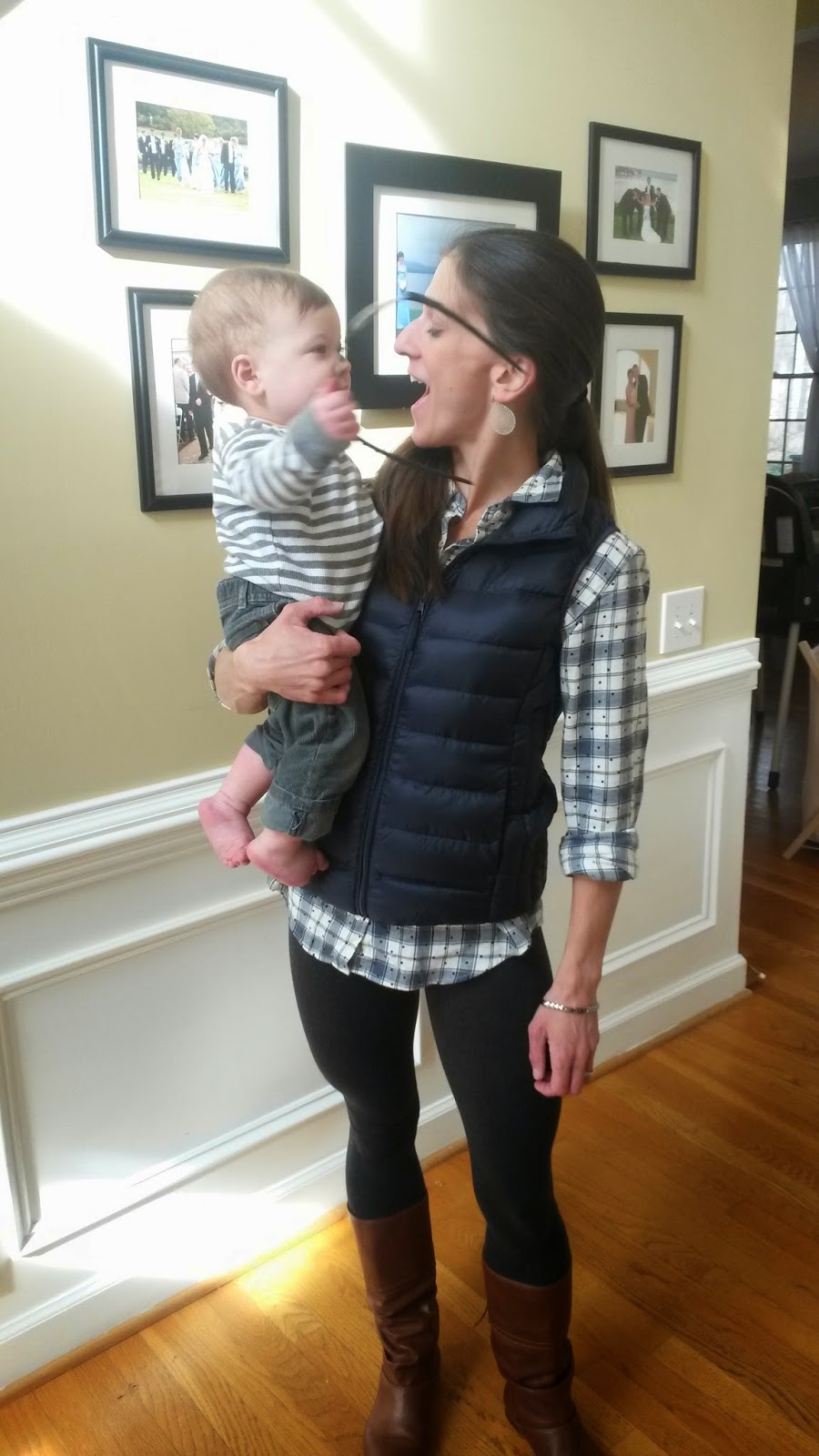 On a final note, I returned to Target this morning.  The "naughty and nice" section has been replaced with the "sexy" lineup for Valentine's Day.  Low and behold: 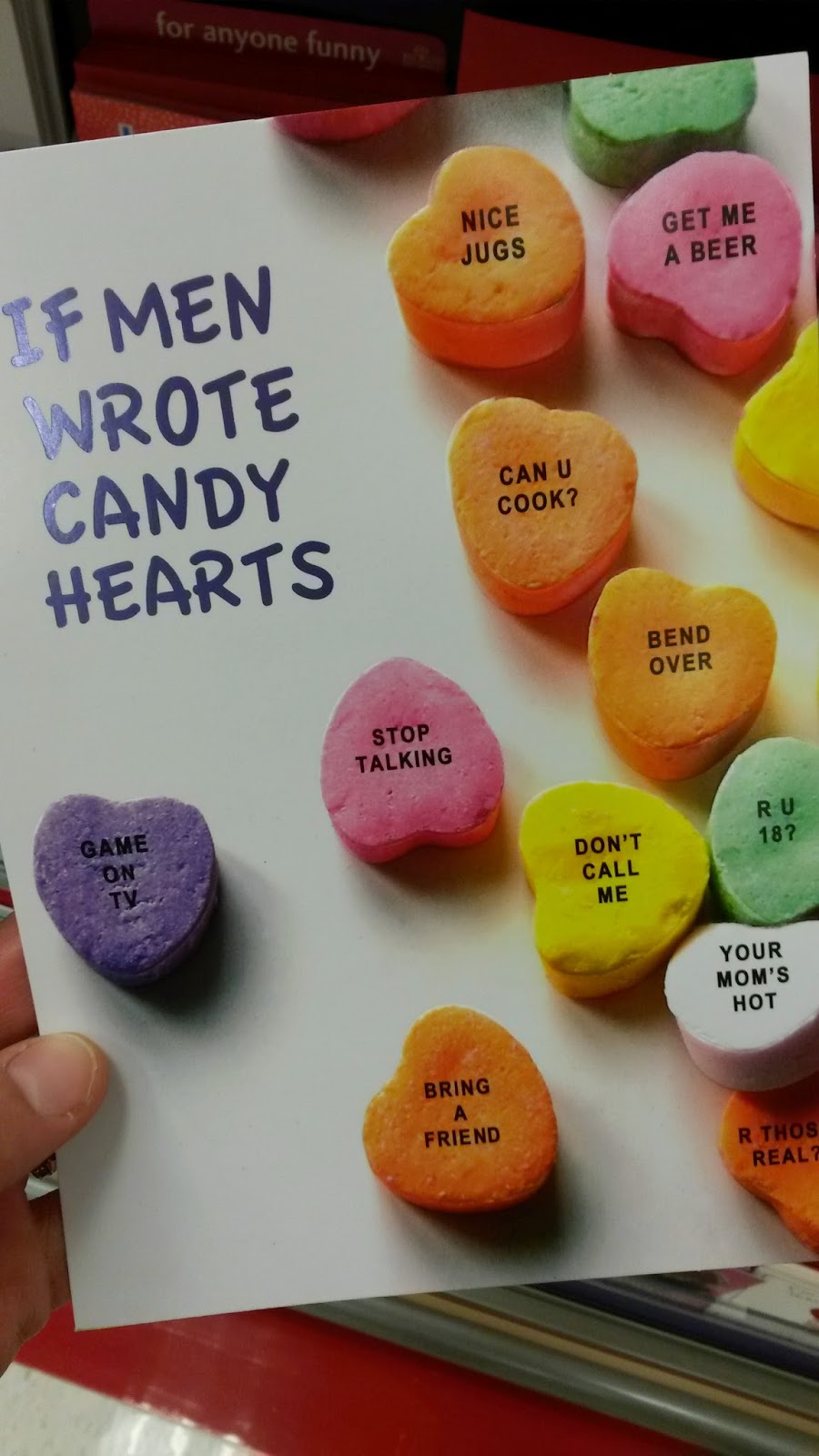 Does that really say bend over?!