A blank screen.  That's what I'm looking at right now after almost five months of not writing, and I have no clue where to start because so much has happened.  ...so much has changed.  Actually, I remember this same "lost" feeling on day one back to running after five months off, but hey, look at me now.  Sometimes, a clean slate is just what we need to get us where we want to go...

For the most part, I feel back to myself again, but I believe this to be true:  for every day you're pregnant, you need a day to recover.  It's kind of like Deena Kastor's marathon recovery advice:  for every mile you race, you need a day to recover.  For the first four five six months of Cooper's life, I was basically, well, batshit crazy.  I experienced a lot of physical symptoms (impetigo, wet skin sensations, random sweating, heart palpitations, digestion issues) that ultimately led me into some deep "what if I'm dying and can't take care of my children" anxiety.  After visiting six doctors, ruling out any auto-immune disorders, and adjusting to some new dietary restrictions, I'm finally at a place where I'm enjoying and appreciating the present instead of worrying about the future.  Cooper is now 7.5 months old, and I've officially upgraded myself to just, well, crazy.  One thing is for sure - anxiety is batshit ugly, and I don't wish it on anyone.

Throughout these months though, being able to run again lifted these thoughts way more than any doctor could.  Once through that first eight week "sluggish-I'm slow as shit-why don't my shorts fit yet-am I sweating or was that pee?-I'm pretty sure I just farted, but yeah, I can't feel it" post-preggo phase, Coach Hubby Mike and I set up a 12-week plan to get me back to my first race, a five-miler in my hometown in CT.  Training consisted of gradually building miles, a bunch of tempo and fartlek runs, one solid speed workout, and leg strengthening work.  I hit one 60-mile week but had to be careful in dealing with some ankle pain, which was apparently caused by a slightly fallen arch and stretched retinaculum (no idea if I spelled that right) ligament during pregnancy.

Race day.  Since the race distance was not exact (slightly long), my goal was just to get back in the race mindset and do just that - race people.  At the start line, I saw a Kenyan woman and another woman in butt huggers, and I mentally weakened, saying to myself, "well, just go for third place."  Then I remembered what a college coach once said to me on a recruiting trip:  "If you treat yourself like a second-rate runner, that's always what you'll be."  Time to race, Jen.  I passed the woman in butt huggers at mile one, the Kenyan just after mile two, and won the race, averaging somewhere between 6:00-6:10 pace.  I felt strong, am incredibly appreciative for such a strong comeback, and left feeling confident as hell.

Okay, I digress.  ...I've thought a lot about that mental breakdown on the start line.  It brings me back to the day I delivered Cooper, when I took an epidural at 6cm dilated.  Was I in pain?  Of course...  every woman in delivery experiences pain.  Was it excruciating at that point?  No.  Cooper was born less than an hour after that epidural.  Perhaps I could have toughed it out?  Point being, here's what I learned about myself that day that I will carry forward into my races:  I fear the unknown/pain more than I allow myself to experience it.  Don't ever assume someone is better than you, and don't ever assume how bad something will hurt, as both will hold you back from reaching your potential.

Digression over.  So, what's next...  I'm currently nursing that same ankle after stepping on a cobblestone awkwardly last week (a scan luckily showed no bone stress), but other than that, it's time to focus on a fall marathon with either a 10K or half marathon tuneup en route.  We're still trying to navigate some sleep deprivation and general family-work-training balance, but all should only improve moving forward.  I'm excited to get my miles up to an all-time high and focus on some additional strength work too.  Plus, according to the Deena rule, I still have 1.5 months left until I'm completely myself again.  ...maybe then I'll get upgraded to no longer even being crazy, but yeah, probably not. :) 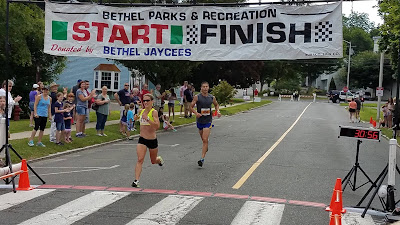 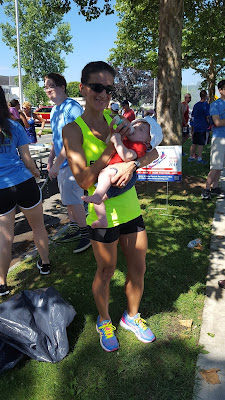 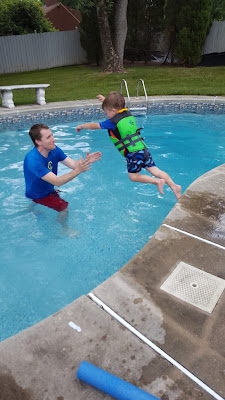 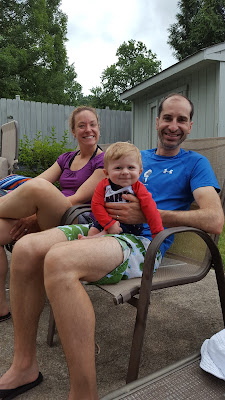 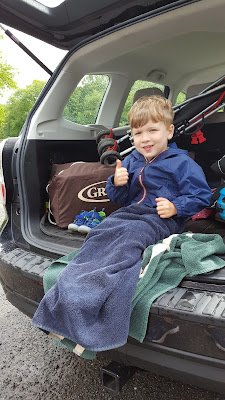