If competitive eating were an Olympic sport, I definitely would have secured an OTQ (Olympic Trials Qualifier) by now...

But unfortunately, it's not.  However, on December 13th, I'm set to reach the finish line of my ninth "marathon", where Logan will be awaiting the arrival of Butter, his new baby lion.  Yes, Logan thinks there's a lion in my tummy, which he proudly named after watching me eat wayyy too much of a certain something recently.

In actuality, Logan will be greeted by his new baby BROTHER, which means, yes, I will forever be surrounded by men.  Ladies, I'm currently planning my 2017 girls' night calendar, so let me know when you're free.  And to anyone that's tempted to ask if we plan to have a third to try for a girl?  Two words:  HEYULL NO.

Weight Gain:  Nine pounds.  Recommended?  Five.  I know, I know, I'm such an overachiever.  Given that the lion is only about the size of a goldfish right now, I'm pretty sure my ass just grew its own ass...

Cravings:   Pizza and spaghetti with a side of tortellini, a family sized bag of Smartfood popcorn, wheat rolls lathered in BUTTER, and Skittles, preferably all served together.

Aversions:  Wine.  The lion is truly f'ing with me.

Running:
Since I'm "high-risk" due to previous miscarriages and pre-term labor, I've cut my mileage by more than half.  However, as long as I keep it easy, my doctor encourages me to continue, stating that it would be a bigger shock for my body to stop doing what it's used to.  So, I'm getting out four to five times per week for four to seven miles, all at recovery effort (which is ~7:45-8:00 pace right now).  I also make sure not to run in temperatures above 69 degrees, as overheating is a pregnancy no-no.  On the other days, I supplement with light weights and the recumboringent bike.  I may or may not have eaten a snack bag of Doritos while pedaling the other day... 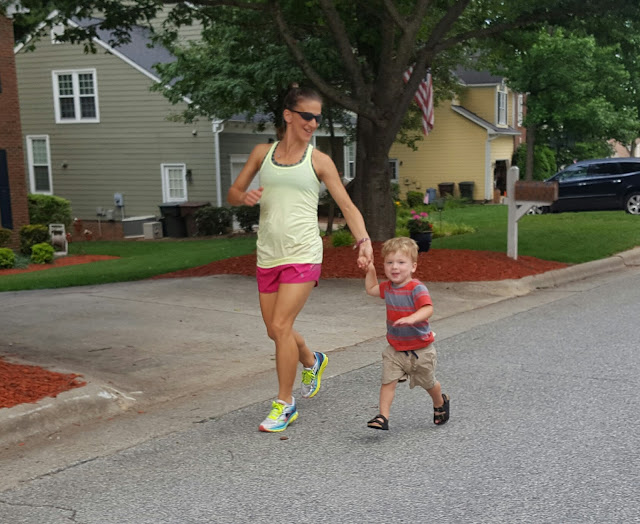 The 2020 OTQ Plan:
While it's hard to plan too much around pregnancy (eh hem, not mentioning any names, but I know a boy that surprised his parents by arriving six weeks early), the tentative plan is to resume training in February 2017.  The qualification period for the 2020 Olympic Marathon Trials should open in summer or fall of that year and remain open until at least the end of 2019.  I will use a 2017 fall marathon as my first marathon back and plan spring and fall races accordingly from there.

I realize the challenges that raising a toddler and a newborn while coaching full-time will pose on my OTQ dream, but I'm ready and willing to tackle them.  I've already fielded some warnings, some wanted and some not, about how bouncing back after the second is harder than the first and how having two is more like caring for a gaggle of inconsiderate, poop-exploding geese.  When someone pokes about my age (I just turned 36), I respond with stories of Meb and, more recently, Heidy.  I use all of this as fuel for the fire, as everyones' experiences and how we choose to respond to them are very different.

Furthermore, and more so than in my first pregnancy, I miss training TERRIBLY.  Many wonder how women can possibly get faster after pregnancy.  Personally, I don't think it has as much to do with the physical changes our bodies experience as much as the emotional.  We're forced to take that ever-so-crucial break from training, and we therefore come back fresh, more motivated, and simply wanting it more.  I'm already pumped to take my training to the next level; having always been a low-mileage runner, there's still a lot more in these legs.

To aid in my comeback, I'm considering having my tonsils removed at the tail-end of my pregnancy recovery and immediately before I resume training.  I experienced seven bouts of tonsil infections/antibiotics in the two years after Logan was born, which I know were caused by a lack of sleep while working my body hard in so many ways.  Of course, I need to speak to my doctor about whether this is medically smart/safe, but I'm willing to do whatever it takes to achieve my dream while also being the best wife, mom, and coach I can be.