It's Saturday morning at Starbucks, and even though it's 30 degrees outside, there's a warmth inside making me so happy.  Maybe it's the white mocha.  Maybe it's that I'm writing again; on weekends, Mike and I typically take turns running & biking, but since I'm resting this week, I'm writing instead.  Maybe it's my runners kicking ass combined with a first feel of the holidays; my phone is "dinging" incessantly as 33 of my runners cross race checkpoints this morning, and a fellow white mocha-er therefore just nicknamed me "Jingle Bells" (I actually think I'm pissing her off, but meh, whatever, lady.).  Or maybe it's the fire that ignited in me last weekend, having surpassed my goal of getting back into the shape I was in before getting pregnant with Cooper...

Last Saturday, I ran the CNO Financial Indianapolis Monumental Marathon.  I finished in 2:51:04, a nearly four minute PR only 11 months after bringing Cooper into our family.  To say that I'm hopeful and confident at what's to come is an understatement.  I tear up thinking about it, in part from sheer excitement and pride, and in part because I can't control the f*cking hormones still residing in my body.

Training went well.  After 19 long-ass-fucking weeks of not being able to run during and after pregnancy, every step ...every "how-the-hell-will-I-ever-get-it-back" step... felt like a gift.  Coach hubby Mike took a conservative approach to my training, knowing that coming back from pregnancy involves risks, mainly injury and sickness from body changes, a lack of sleep, and oh yeah, being responsible for two totally awesome and beautiful but I'd be lying if I said it wasn't really fucking hard mini people.  Even so, as my body continued to figure out its new normal, I managed through misplaced ankle tendons, plantar fasciitis, and ass muscles tighter than how my regular sized jeans not even close fit when I was 35 weeks pregnant.  Therefore, other than the "comeback" five-miler in July, we decided not to run any other races before the marathon and to keep my weekly miles maxed around 70, which is low compared to many others going for the OTQ standard.  I also owe some serious thanks to Elite Performance Chiropractic for keeping all these weaknesses under control and for giving me the confidence to push through them.

I chose Indianapolis mainly for the competition.  It's one of the top 15 largest marathons in the country, and many guys and gals chasing down big dreams descend upon the city.  The irony in this is that I ended up running by myself most of the way.  That's okay though; it's a phenomenal race, and after a week of taper crazies brought on by a doubt-inducing cold (thanks for putting up with my lame ass, Coach hubby Mike), once the gun went off, I was f*cking PUMPED.  I went out conservatively to get warmed up, passing mile one in 6:49, then settled into a 6:20-6:30 pace through mile 22.  The final four miles proved more challenging, passing in the 6:40-6:50 range.  I crossed the line as sixth female, unable to control my tears of relief, joy, and yep, hormones.

Forward progress is a process that requires passion, will, and patience.  Like I told one of my runners over lunch the other day, there's no point in trying to go from point A to Z overnight, as this will only result in frustration.  Since 2013, I've been consistently taking about four minutes off my marathon time (3:02, 2:58, 2:54, 2:51), and I now have six more to go to attain the trials standard.  I'll most likely focus on speed/shorter distance races this spring, as I need to add strength back to the endurance now, and the mental shift away from the marathon is important too.  We've already identified many areas for improvement, and fall 2018 will be my next marathon target.  I can't f*cking wait. 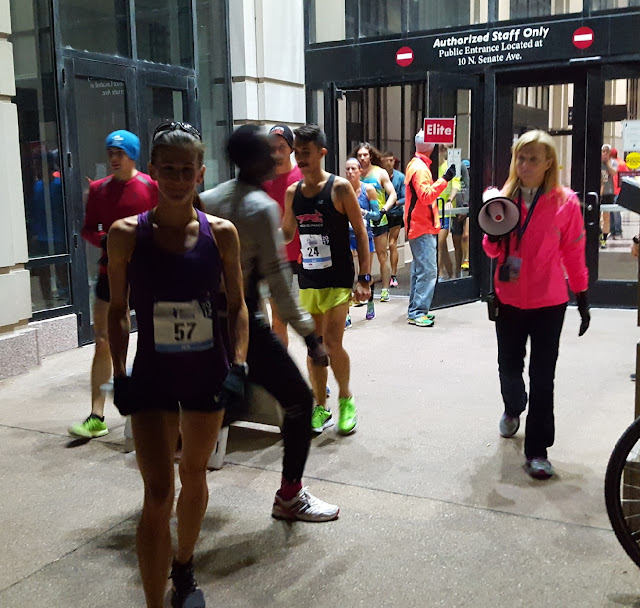 Heading to the start line 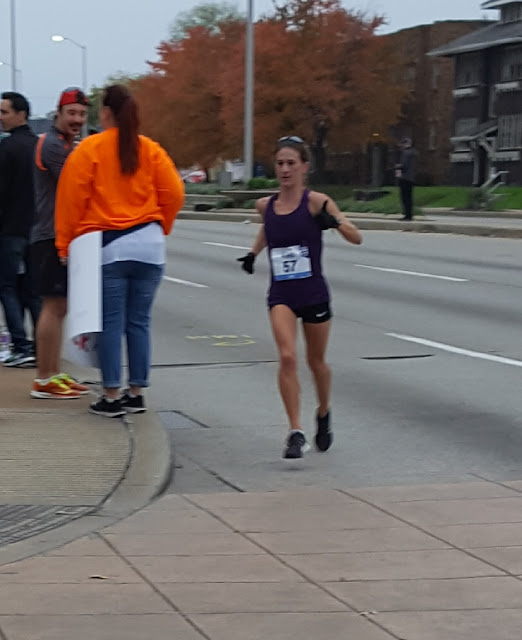 Lonely but strong at mile 10 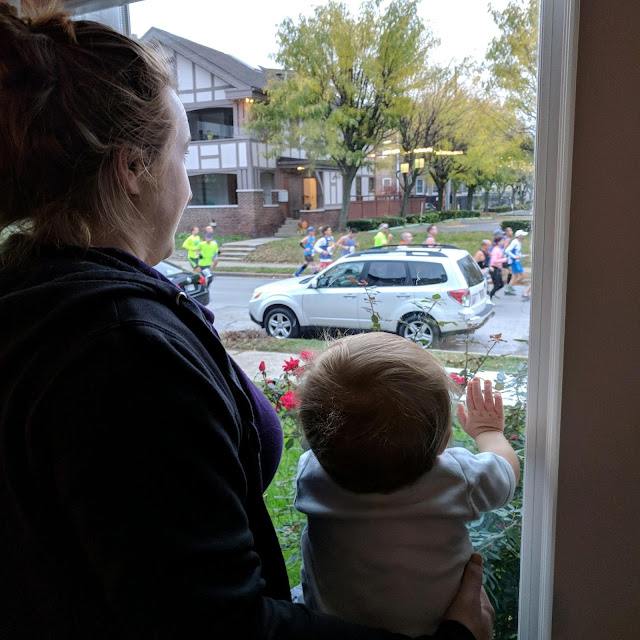 And this is really what it's all about.  Logan, inspired by the morning, wanted to have running races the rest of the day.
<3


Happy Running!
Posted by RunJen at 11:14 AM No comments: